By A Jones For Organizing In General organizing

Sometimes it just takes a little dab of something to keep things organized and in place. One of my favorite products for this is Museum Gel. Have you heard of it?

As the name implies, museums use it to keep artwork and other items in place, so that even if the display cabinets are jostled or bumped, things won’t get knocked over. From what I hear, it will hold things in place through a tremble in California earthquake country. You can find it on Amazon.com, and at The Container Store.

It’s an unusual substance; it’s not glue or adhesive. It won’t damage most surfaces, and after it has been set, you can twist the item to free it from where it was fixed down. It’s kind of a soft, moldable plastic, and feels a little like dry jelly in your fingers. A little goes a long way, and if you try to use too much of it, you’ll have a mess on your hands and it probably won’t be as effective. All it takes is a pinch of it, to put little dabs around the edges of the surface that you want to adhere.

I keep my jar of it out in the garage.  Here in Austin TX, summer temperatures climb over 100 degrees sometimes.  You would think it might melt or turn into liquid. But it doesn’t. It’s one of those mysterious substances that doesn’t seem to be affected by heat at all. I have a category in my head for Things I Don’t Need To Understand, and this one of those things.

It IS affected by gravity, however. Don’t try to use it to attach posters to the wall. The results will not be pretty, and the oozing Museum Gel down your wall will make a mess. Horizontal usage is the way to go.

Like making a vase unbreakable. This vase in my own house, for instance. 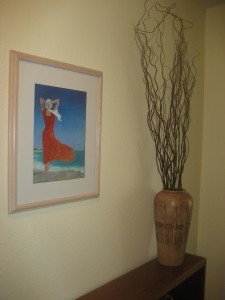 My vase, as you can see, is tall and narrow and top-heavy. My cat would think it would be HILARIOUS to knock this vase over. But he can’t, because I secured it to the wooden table with Museum Gel. (I did this out of his sight, so he wouldn’t be curious about what I was doing and come over to do scientific cat testing.) After that Museum Gel has set, he can’t push the vase over even if he tries. 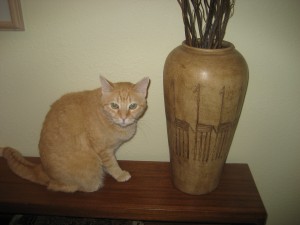 You can see that he is not amused.

There is also a related product called Museum Putty, that is gray, but the cool thing about Museum Gel is that it’s crystal clear. It is perfect for securing glass items in place on glass shelves, because it will be virtually invisible. But, it has other uses that you might not think of:

Have you found other uses for Museum Gel?  Tell me about them!

Please log in again. The login page will open in a new tab. After logging in you can close it and return to this page.